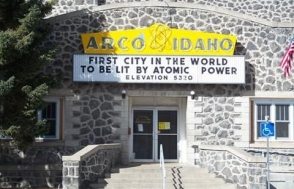 I doubt Arco, Idaho is a big tourist destination, although it has an interesting claim to fame: in 1955 it became the first city in the world to be lit by atomic power.   Not coincidentally, it is also where the world’s first deadly nuclear reactor meltdown occurred: 3 people died in 1961. We also read it was where TV was invented, but I don’t see any reference to that on the internet anymore.  Don’t laugh but we chose this town to stay at, in part, because of its history.  Mostly though we stayed because its has a nice looking campground within 20 miles of Craters of the Moon National Monument.  We visited that monument on a 2010 family vacation that took us from the Oregon Coast to Yellowstone.  Read about our Craters visit further down in this blog.

My thoughts of the campground.

We were only in this KOA campground from dusk to dawn, so we didn’t collect a whole lot of intelligence for your assistance.  Fundamentally though, we can definitely give  Arco’s KOA  a thumbs up for a quick overnight stay.

This campground was nice and orderly.  It’s sites were level and  easy to get into and out of.  They were grassy to keep the dust down, and to provide the dogs with a comfortable place to lie.  It’s bathrooms were nice and clean… and not busy.  The campground was perhaps a quarter full the night we were there so we never actually bumped into anyone.  That made it nice and quiet with a private feeling even though it has the typical private campground set-up with sites crowded side-by-next down a looped street.  Suspect the majority of the campers were also there short-term on their way between places.

We normally would have stayed right in the national park, but it doesn’t offer reservations and its photos didn’t make the moon look like a nice place to camp.  This KOA’s pictures showed grassed sites, some trees and a pool, so we prebooked here instead.   Being 19 miles further down the road was nice in that it shortened the next day’s drive to Jackson Hole that much.  In hindsite, for that reason, we may have opted for an even further destination such as Idaho Falls. No worries though.  This KOA was great for an overnighter and we were still less than 3 hrs to Jackson Hole the next day. 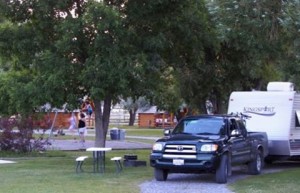 Recommended Sites: Sorry we didn’t stick around to take notes.  Here is a photo of one of their sites which they have posted on their website.  It looks a lot like what we remember ….way more greenery than Craters of the Moon’s campground!  We weren’t this close to the playground. 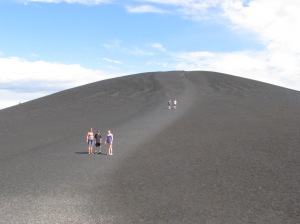 “Giant steps are what you take,

walking on the moon.

I hope my legs don’t break,

walking on the moon”

That song kept going through my head as we spent the day in Craters of the Moon National Monument.  It really does look like you’re on the moon.   So much so that astronauts like Alan Shepard used the area to train on how to pick up moon rocks.

our Durango and Tent Trailer doing the 7 mile loop

This moonscape was created by geological forces pushing lava through 50 mile wide cracks, which flowed forever before cooling into a crust.  What’s left are coned volcanoes you can hike up, and fields of caves you can hike in.  Pretty cool stuff.

Like most visitors, we started by driving the 7  mile loop, stopping at various points of interest to do small hikes and take photos.  This is an easy and comfortable way to see the sites at your own pace.   Some hikes were easier and less steep than others.  Some were more memorable and photogenic than others. 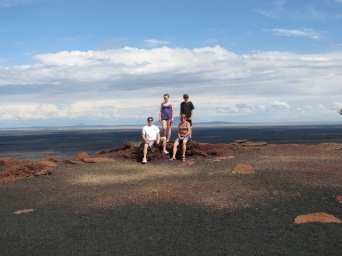 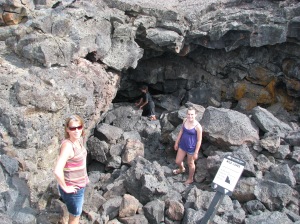 We ended with the 7th stop which is a trail out to some caves.  We had fun climbing over boulders with the dogs and exploring some caves.  Nothing hardcore but you need to be fairly nimble and careful. 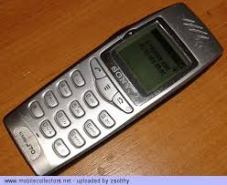 Can anyone find my old cellphone?

Case in point: while we all got out alive, my 3 year old cellphone was not so lucky.   I got to spend the last 10 days of my 2010 vacation out of touch with the office, with a good story to help explain why I needed a new phone.  My old one is probably still down some cave at Craters of the Moon National Monument in Idaho. (The same trick worked in a Mexican taxi in 2014.)

2 thoughts on “Craters of the Moon KOA – Arco, Idaho”