RVs are engineered to be as light as possible so they’re easier to tow.  The flip side of that benefit is that the interior material is typically pretty flimsy.  Case in point: one of our overhead cabinet doors came right off in Blair’s hand!

We did a quick search and didn’t find a good posting on how to fix an RV door, so Blair took a stab himself.

We thought we should blog our approach in case it helps anyone, or in case someone else can comment on how to do this job more effectively.

The door’s hinges held, but the  brace they screw into pulled right off of the overhead cabinet. That brace is made of particleboard which didn’t provide enough strength to hold the metal joiners.

The cabinet is essentially a box made from 1×1 strips, covered by an oak-looking veneer.  The root cause appears to be that the veneer is too weak to hold a screw.

We decided to sacrifice a few ounces of trailer weight by adding an actual piece of hardwood!

Some fir (that’s all the hardwood our local big box hardware store carries) was stained ‘summer oak’ and varnished.  We weren’t too worried about an exact colour match as this was to be used out of sight inside the cupboard.

We glued the fir behind the veneer where the outside brace goes.

We then glued the pulled-off brace back into it’s original place.

Finally, we replaced the hinges 1/2″ screws with 1″ versions that reach through the veneer into the new fir backing. 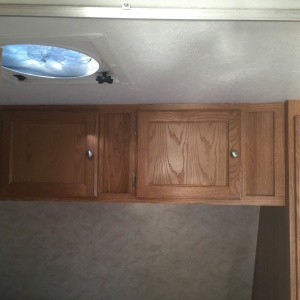 Cut, stain and varnish the wood a couple of days in advance, breaking this job into a few simple sub-tasks.

The only ‘tip’ we can offer is to hold the door in its right place while re-screwing the hinges by:

1) ‘clasping’ the pull side of the door where it needs to be when closed, &

2) we were lucky in that this particular door leads to a common space which is also fed by another door .  That allowed us to still reach in to hold the fir backing strip in place while pressing hard from the outside with the drill / screw gun.  Most cupboards won’t have that luxury.

Next time we’re at a specialty hardware store, we’ll pick up some 1 1/4 inch screws that colour match better.

We’re worried that the brace still isn’t strong enough. One end is glued to the bottom of the cabinet, but the top isn’t secured. Its possible the whole thing needs more boxing and bracing. We wanted to try our current method first as adding more bracing  could unnecessarily add weight and take up too much space inside the cupboard.

We’ll update you if we need to beef up this fix.

5 thoughts on “Fixing an RV Cabinet”