For your average Canadian spring break does not include camping, unless you are hard core. Since I have already admitted to being a “rural camper” there was never a time I even considered camping in March. As a family we will usually head to a sunny destination and this year it was Los Cabos, Mexico. Us along with 3 of our fellow camping families headed to an all inclusive resort for a great family get away.

Los Cabos suffered a terrible hurricane in September 2014 but they have done an amazing job cleaning up their town. We had been to Cabo several years back and were drawn back due to the great weather and as expected the weather was fantastic. What we didn’t expect was we were also traveling during whale watching season. Now being from British Columbia you might think we would not be impressed but I can tell you we were totally amazed. The sheer number of whales far exceeded anything we had seen in BC.

We were staying at the Sandos Finesterra Resort which is located on the top of a hill overlooking both the marina and the Pacific Ocean. There were several view points within the hotel that allowed us to watch the whales breaching in the distance. In fact we could sit at the pool and see numerous whales just off the shore. There were so many whales that while we were there a snorkelling tour had a whale breech up and onto their boat. It was terrible reminder of just how dangerous these large mammals can be. 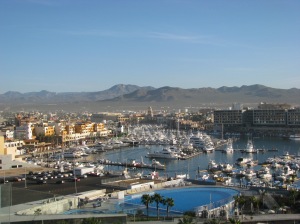 Lately areas of Mexico have been getting some bad press due to the drug problems in certain provinces but I can assure you we all felt safe our entire time in Los Cabos. There were 13 of us in total and at no time did we hesitate to walk into town or have the kids (ages 16 and 17) stay alone at the resort or in their rooms. The staff in the resort and the surrounding restaurants and shops were friendly and aside for a rip off fishing tour, our experiences were memorable. We will be back and I hope it is during whale season again. 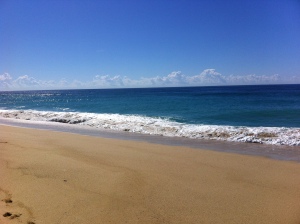 2 thoughts on “Spring Break For A Canadian!”